Sign In Register
2019 Holiday Exchange!
A New and Exciting Beginning
The End of an Era
Avg Price $2.58
Buy on TCGPlayer
​ 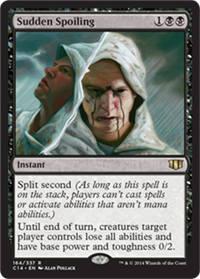 Split second (As long as this spell is on the stack, players can't cast spells or activate abilities that aren't mana abilities.)

Until end of turn, creatures target player controls lose all abilities and have base power and toughness 0/2.

9/25/2006 Sudden Spoiling doesn’t counter abilities that have already triggered or been activated. In particular, you can’t cast this fast enough to stop a creature’s “At the beginning of your upkeep” or “When this creature enters the battlefield” abilities from triggering.
9/25/2006 Sudden Spoiling affects only permanents that are creatures on the battlefield under the targeted player’s control at the time Sudden Spoiling resolves. It won’t affect creatures that enter the battlefield later or noncreature permanents that later become creatures.
9/25/2006 If a creature controlled by the targeted player gains an ability after Sudden Spoiling resolves, it will keep that ability.
9/25/2006 If a face-down creature is affected by Sudden Spoiling, it won’t be able to be turned face up for its morph cost. If some other effect turns it face up, it will remain a 0/2 creature with no abilities until the turn ends. Its “When this creature turns face up” or “As this creature turns face up” abilities won’t work.
6/7/2013 Players still get priority while a card with split second is on the stack.
6/7/2013 Split second doesn’t prevent players from activating mana abilities.
6/7/2013 Split second doesn’t prevent triggered abilities from triggering. If one does, its controller puts it on the stack and chooses targets for it, if any. Those abilities will resolve as normal.
6/7/2013 Split second doesn’t prevent players from performing special actions. Notably, players may turn face-down creatures face up while a spell with split second is on the stack.
6/7/2013 Casting a spell with split second won’t affect spells and abilities that are already on the stack.
6/7/2013 If the resolution of a triggered ability involves casting a spell, that spell can’t be cast if a spell with split second is on the stack.
Posts Quoted:
Reply
Clear All Quotes
Back to Top