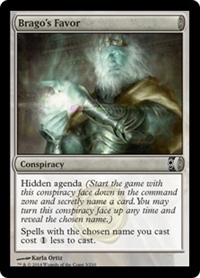 Spells with the chosen name you cast cost 1 less to cast.