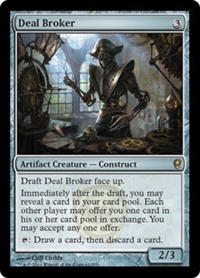 Immediately after the draft, you may reveal a card in your card pool. Each other player may offer you one card in their card pool in exchange. You may accept any one offer.

T: Draw a card, then discard a card.

5/29/2014 You may reveal Deal Broker itself for its second ability. If you do, and you accept another player’s offer, that player won’t be able to use the second ability to offer another exchange.
5/29/2014 When you use Deal Broker’s second ability, after you reveal your card, each other player chooses up to one card from their card pool, then all those chosen cards are revealed simultaneously.
5/29/2014 If you accept a player’s offer, the card you revealed becomes part of that player’s card pool and the other offered card becomes part of your card pool.
5/29/2014 The cards exchanged this way aren’t drafted. They can’t be removed from the draft by Cogwork Grinder, for example.
5/29/2014 If either card involved in the exchange has any information noted for it, that information stays with the exchanged card, not the player who initially drafted it. Any abilities that refer to actions taken as you drafted the card (or similar) now refer to the card’s new owner, even though that player wasn’t the person who actually drafted the card.
5/29/2014 If a player exchanges a card that has multiple pieces of information noted for it, all of the information is shared during the exchange. For example, if you receive a Cogwork Tracker from a player who drafted multiple Cogwork Trackers, your Cogwork Trackers may attack any player noted by either you or the other player for Cogwork Tracker. The other player will not remove a noted player from their remaining Cogwork Tracker.
5/29/2014 If more than one player drafts a Deal Broker, players who wish to use the second ability to exchange cards do so in a random order.
5/29/2014 If your draft is breaking up into multiple games, the exchange happens before it’s known who will be playing in each game.
Posts Quoted:
Reply
Clear All Quotes
Back to Top