Sign In Register
2019 Holiday Exchange!
A New and Exciting Beginning
The End of an Era
Avg Price $0.49
Buy on TCGPlayer
​ 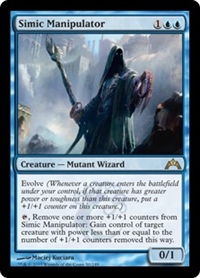 T, Remove one or more +1/+1 counters from Simic Manipulator: Gain control of target creature with power less than or equal to the number of +1/+1 counters removed this way.