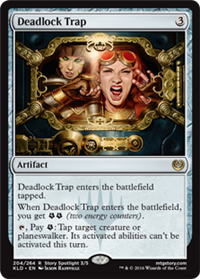 When Deadlock Trap enters the battlefield, you get EnERGyEnERGy (two energy counters).

9/20/2016 Activated abilities contain a colon. They’re generally written “[Cost]: [Effect].” Some keywords are activated abilities and will have colons in their reminder text.
9/20/2016 Once a player has announced an ability, Deadlock Trap can’t be used to undo it. The last ability must be activated before that player activates that ability.
9/20/2016 Players may respond to Deadlock Trap’s last ability by activating an ability of the target permanent if that ability’s timing permissions allow it.
9/20/2016 After a planeswalker enters the battlefield, the active player receives priority and may activate an ability of that planeswalker before any player can activate Deadlock Trap’s last ability.
9/20/2016 A tapped planeswalker can be attacked or dealt damage as normal.
9/20/2016 If the tapped creature somehow becomes untapped, it can attack and block as normal, but its abilities still can’t be activated this turn.
2/9/2017 is the energy symbol. It represents one energy counter.
2/9/2017 Energy counters are a kind of counter that a player may have. They’re not associated with specific permanents. (Other kinds of counters that players may have include poison and experience.)
2/9/2017 Keep careful track of how many energy counters each player has. You may do so by keeping a running count on paper, by using a die, or by any other clear and mutually agreeable method.
2/9/2017 If an effect says you get one or more , you get that many energy counters. To pay one or more , you lose that many energy counters. Any effects that interact with counters a player gets, has, or loses can interact with energy counters.
2/9/2017 Energy counters aren’t mana. They don’t go away as steps, phases, and turns end, and effects that add mana “of any type” to your mana pool can’t give you energy counters.
2/9/2017 You can’t pay more energy counters than you have.
1/19/2018 There are many important moments in the story, but the most crucial—called “story spotlights”—are shown on cards. These cards have the Planeswalker symbol in their text box; this symbol has no effect on gameplay. You can read more about these events in the official Magic fiction at http://www.mtgstory.com.
Posts Quoted:
Reply
Clear All Quotes
Back to Top