Sign In Register
2019 Holiday Exchange!
A New and Exciting Beginning
The End of an Era
Avg Price $0.24
Buy on TCGPlayer
​ 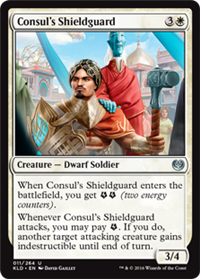 When Consul's Shieldguard enters the battlefield, you get EnERGyEnERGy (two energy counters).

Whenever Consul's Shieldguard attacks, you may pay EnERGy. If you do, another target attacking creature gains indestructible until end of turn.

2/9/2017 is the energy symbol. It represents one energy counter.
2/9/2017 Energy counters are a kind of counter that a player may have. They’re not associated with specific permanents. (Other kinds of counters that players may have include poison and experience.)
2/9/2017 Keep careful track of how many energy counters each player has. You may do so by keeping a running count on paper, by using a die, or by any other clear and mutually agreeable method.
2/9/2017 If an effect says you get one or more , you get that many energy counters. To pay one or more , you lose that many energy counters. Any effects that interact with counters a player gets, has, or loses can interact with energy counters.
2/9/2017 Energy counters aren’t mana. They don’t go away as steps, phases, and turns end, and effects that add mana “of any type” to your mana pool can’t give you energy counters.
2/9/2017 You can’t pay more energy counters than you have.
2/9/2017 Some triggered abilities state that you “may pay” a certain amount of . You can’t pay that amount multiple times to multiply the effect. You simply choose whether or not to pay that amount of as the ability resolves, and no player may take actions to try to stop the ability’s effect after you make your choice.
2/9/2017 If a triggered ability with one or more targets states that you “may pay” some amount of , and each permanent that it targets has become an illegal target, the ability doesn’t resolve. You can’t pay even if you want to.
Posts Quoted:
Reply
Clear All Quotes
Back to Top