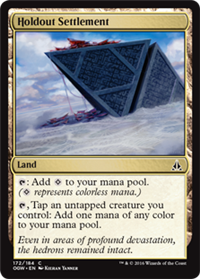 T, Tap an untapped creature you control: Add one mana of any color.

1/22/2016 To activate the last ability, you may tap any untapped creature you control, including one you haven’t controlled continuously since the beginning of your most recent turn. (Note that tapping the creature doesn’t use [the tap symbol].)
Posts Quoted:
Reply
Clear All Quotes
Back to Top