Sign In Register
2019 Holiday Exchange!
A New and Exciting Beginning
The End of an Era
Avg Price $0.54
Buy on TCGPlayer
​ 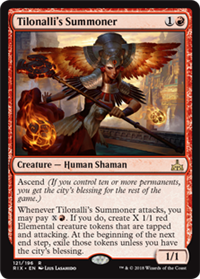 Ascend (If you control ten or more permanents, you get the city's blessing for the rest of the game.)

Whenever Tilonalli's Summoner attacks, you may pay XR. If you do, create X 1/1 red Elemental creature tokens that are tapped and attacking. At the beginning of the next end step, exile those tokens unless you have the city's blessing.