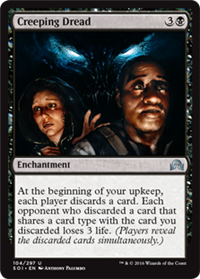 At the beginning of your upkeep, each player discards a card. Each opponent who discarded a card that shares a card type with the card you discarded loses 3 life. (Players reveal the discarded cards simultaneously.)

4/8/2016 When a spell or ability instructs each player to discard a card, starting with the player whose turn it is and proceeding in turn order, each player selects a card from their hand without revealing it, sets it aside, and then all of those cards are revealed and discarded at once.
4/8/2016 The card types that may be shared for Creeping Dread’s ability are artifact, creature, enchantment, instant, land, planeswalker, sorcery, and tribal (a card type that appears on some older cards). Supertypes (such as legendary and basic) and subtypes (such as Human and Equipment) are not counted.
4/8/2016 If a player has no cards in hand, that player doesn’t discard a card while everyone else does. If you didn’t discard a card, no player can have discarded a card that shares a card type with the card you discarded, so no player loses 3 life.
4/8/2016 If an opponent discards a card that shares two card types with the card you discarded, such as an artifact creature, that player still only loses 3 life.
4/8/2016 Because you consider only the characteristics of a double-faced card’s front face while it’s not on the battlefield, a double-faced card with different card types among its faces (such as Skin Invasion) only compares its front face to the other discarded cards.
Posts Quoted:
Reply
Clear All Quotes
Back to Top