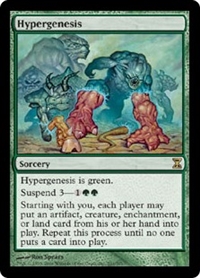 Suspend 3—1GG (Rather than cast this card from your hand, pay 1GG and exile it with three time counters on it. At the beginning of your upkeep, remove a time counter. When the last is removed, cast it without paying its mana cost.)

9/25/2006 In a game of N players, the process ends when all N players in sequence (starting with you) choose not to put a card onto the battlefield. It doesn’t end the first time a player chooses not to put a card onto the battlefield. If a player chooses not to put a card onto the battlefield but the process continues, that player may put a card onto the battlefield the next time the process gets around to them.
10/15/2006 Anything that triggers during the resolution of this will wait to be put on the stack until everything is put onto the battlefield and resolution is complete. The player whose turn it is will put all of their triggered abilities on the stack in any order, then each other player in turn order will do the same. (The last ability put on the stack will be the first one that resolves.)
6/7/2013 You can exile a card in your hand using suspend any time you could cast that card. Consider its card type, any effect that affects when you could cast it (such as flash) and any other effects that could stop you from casting it (such as Meddling Mage’s effect) to determine if and when you can do this. Whether or not you could actually complete all steps in casting the card is irrelevant. For example, you can exile a card with suspend that has no mana cost or requires a target even if no legal targets are available at that time.
6/7/2013 Exiling a card with suspend isn’t casting that card. This action doesn’t use the stack and can’t be responded to.
6/7/2013 If the spell requires any targets, those targets are chosen when the spell is finally cast, not when it’s exiled.
6/7/2013 If the first triggered ability of suspend (the one that removes time counters) is countered, no time counter is removed. The ability will trigger again during the card’s owner’s next upkeep.
6/7/2013 When the last time counter is removed, the second triggered ability of suspend will trigger. It doesn’t matter why the last time counter was removed or what effect removed it.
6/7/2013 If the second triggered ability of suspend (the one that lets you cast the card) is countered, the card can’t be cast. It remains exiled with no time counters on it, and it’s no longer suspended.
6/7/2013 As the second triggered ability resolves, you must cast the card if able. Timing restrictions based on the card’s type are ignored.
6/7/2013 If you can’t cast the card, perhaps because there are no legal targets available, it remains exiled with no time counters on it, and it’s no longer suspended.
6/7/2013 If the spell has any mandatory additional costs, you must pay those if able. However, if an additional cost includes a mana payment, you are forced to pay that cost only if there’s enough mana in your mana pool at the time you cast the spell. You aren’t forced to activate any mana abilities, although you may do so if you wish.
6/7/2013 A creature cast using suspend will enter the battlefield with haste. It will have haste until another player gains control of it (or, in some rare cases, gains control of the creature spell itself).
6/7/2013 Although originally printed with a characteristic-defining ability that defined its color, this card now has a color indicator. This color indicator can’t be affected by text-changing effects (such as the one created by Crystal Spray), although color-changing effects can still overwrite it.
9/20/2016 This has no mana cost, which means its mana cost can’t be paid for effects such as replicate from Djinn Illuminatus or flashback from Snapcaster Mage.
Posts Quoted:
Reply
Clear All Quotes
Back to Top